Select text below for more information:

The term hardness refers to the quantity of dissolved calcium and magnesium in water. These minerals, which come primarily from limestone type rock formations, are found to some degree in almost all natural waters. Calcium and magnesium cause problems for two principal reasons:

Hardness is measured in either parts per million (ppm) or grains per gallon (gpg), where 1 grain equals 17.1 ppm (a common aspirin tablet weighs 5 grains). There is no established limit for the acceptable level of hardness in water, but it is generally considered to start to become problematic at around 3 gpg. Water hardness varies widely throughout the Northeast, with levels ranging from less than 1 gpg In eastern Massachusetts to over 100 gpg in parts of New York. Waters which naturally contain very little hardness can also be problematic because they are often corrosive (see Acidity).

The only practical method for hardness removal in residential applications is through the cation exchange process employed by water softeners (also called conditioners).

Water which contains excess acidity tends to act aggressively towards plumbing and fixtures, causing corrosion and staining (i.e.  -blue green stains on fixtures from copper pipes). Relative acidity is measured on the pH scale, ranging from 0-14, where 7 is neutral, numbers 'lower than 7 are progressively more acidic, and numbers higher than seven are increasingly alkaline (basic). The pH value refers not to the quantity of acidity, but rather to the ratio of acidity to alkalinity.

Alkalinity acts as a buffer to de-activate the acidity, a process called neutralization. For example, we apply limestone (calcium carbonate) to soil to offset the acidity which comes from acid rain and decaying organic material. The acceptable pH range for water is 6.8-8.5.

Acidity cannot be removed from water. Therefore pH is raised by adding alkalinity. This can be done by injecting a highly basic (alkaline) solution with a feed pump or by passing the water through a bed of processed limestone or similar mineral.

Iron is one of the most pervasive problems in the Northeast, particularly in water from deep wells. Wafer containing even a significant quantity of iron may appear clear when drawn, but will rapidly turn red upon exposure to air. This process is called oxidation, and involves the conversion of ferrous (dissolved) iron, which is highly soluble, to ferric (precipitated) iron, which is largely insoluble. The ferric Iron then causes red/brown staining on clothes, fixtures, etc.

Iron concentration is measured in ppm or molt (milligrams per liter, where .1 ppm = 1 mg/l). Staining usually becomes a problem at concentrations greater than 0.3 ppm. Removal is through ion exchange (water softener) or oxidation/filtration (APIR).

Manganese is a metal similar to Iron which causes a grey/black stain. It is more common in the Northeast than in most other areas of the
country. It can cause staining In Concentrations as low as 0.05 ppm.

Manganese is removed in a manner similar to iron, although oxidation is more difficult. requiring a pH of at least 8.5.

Hydrogen sulfide Is a gas which smells strongly like rotten eggs. It results from the decay of organic matter and the presense of certain types of bacteria. Even very Jow concentrations are offensive 85 welt as highly corrosive (silver tarnishes almost immediately upon contact with H2S).

Because it is in the form of a gas, H2S cannot be collected in a sample bottle for laboratory analysis. Therefore its presence must be reported when a sample Is submitted for a treatment recommendation. It can be removed by oxidation/filtration or by well sanitization.

Turbidity ranges from large particles which will settle out of solution rapidly (such as sand). to extremely fine sediment which may stay suspended in solution even after standing for hours. Treatment depends upon particle size, which is measured in microns.

The presence of toxic chemicals at various concentrations has been widely documented in many water supplies. Detection can be difficult as these contaminants often have no taste or odor. Treatment depends on type and concentration. 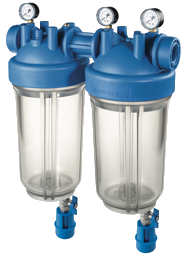 Q. Why are my fixtures staining?

A. There could be secondary contaminants in the water such as iron or manganese.

Q. Why does my water taste funny?

A. There could be iron in your water.

Q. Why does my hairdresser tell me I need a water treatment system?

A. Because the secondary contaminants can cause your hair to change color.